Multifamily affordable housing — built inside a factory and assembled room by room — could soon be headed to San Diego County.

At Factory OS, apartment complexes are constructed room by room. Modular units are moved along on an assembly line: floors, dry wall, windows, then electrical, counters, and so on. When the units are completed, they are trucked to the construction site, and assembled like legos.

“Not only can I build faster, but I can build for less,” said Bill Cavanaugh, co-founder of US Modular. He is based in San Marcos.

Modular in its infancy, but it has arrived

“We’re in Carlsbad. This is a home we built with modular construction,” said Cavanaugh, as he stood before a two-story home on James Drive.

The house is a 2,800-square-foot Craftsman style home

The first floor of the garage was built on site, but the rest of it was assembled at a factory in Arizona. Six modular units, created on an assembly line, were transported to the location, and put together in a day. Within 60 days, the electrical and other finishings were complete. Read more

“Low income should not be confused with low quality,” Kevin says. “These homes are very well built.” He says he likes working with the families, and enjoys the everchanging work as the houses progress. “It was exciting to see the walls go up, the roofs go on, then the windows and now thefamilies are installing kitchen cabinets and flooring.”

Habitat for Humanity selected Stringfield's home as its first 3D-printed project. Initiated between a partnership with Alquist, a 3D-printing construction company, it is the organization’s effort to confront the nation’s affordable housing crisis, which increased due to multiple factors including the heightened costs of materials during the pandemic and a booming demand on the housing market 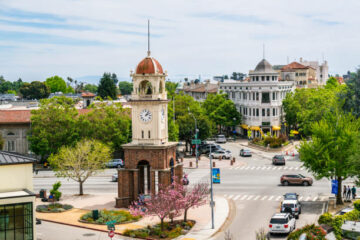 The $20 million will support improved infrastructures like biking, lighting and the widening of Maple Alley which will eventually tie into the River Walk along the San Lorenzo River. And will provide the groundwork for two major affordable housing projects on Lower Pacific Avenue.